“We are now faced with the fact that tomorrow is today. We are confronted with the fierce urgency of now. In this unfolding conundrum of life and history, there “is” such a thing as being too late. This is no time for apathy or complacency. This is a time for vigorous and positive action.” 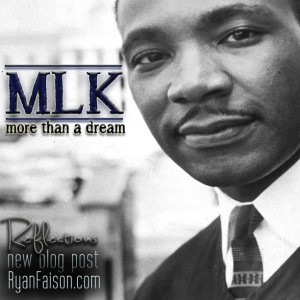 The national Martin Luther King, Jr. holiday prompts almost universal praise for the well-known “I Have A Dream” speech on the steps of the Lincoln Memorial on August 28, 1963. National media outlets play excerpts of Rev. Dr. King masterfully describing the corruption of racial injustice and the potential of racial reconciliation. Dr. King articulated a great dream, but the “I Have A Dream” speech was more than a dream – it was a call to action.

Before ascending to the heights of leadership on the international stage, Dr. King was trained in the value of service. Serving the felt needs of people was his top priority. An urgent need that he could not ignore was the racial injustice poisoning the culture in America. He could not stand idly by while discrimination, racism and injustice ran rampant. His devotion to service was not lip service – he made the choice to service with action and devotion.

As an MLK Scholar at Seton Hall University, I was reminded of the great call to action that laid at the feet of my generation. Breaking the cycle of entitlement, it was (and still remains) our responsibility to serve and give of ourselves to the betterment of society. When I think of MLK’s life of service – I must ask: What are we willing to give to serve others? What time, talent, treasure and efforts will we give for the sake of others? As we dream for a better life and society, we can start serving where we are to bring about change.

DEDICATED TO THE CAUSE

Some historians and observers mistakenly limit Dr. King’s influence only to the realm of social justice and racial reconciliation. I would caution you not to make the same error. Dr. King’s cause was greater than seeing racism eradicated. It was extended to the root of the Gospel – love. Unlike the “love” defined by our culture in moments, Dr. King served out of a love defined by the Scriptures – sacrificial giving. His example was in the Savior he preached about. His model was in the sacrifice of Jesus Christ on the cross for the sins of humanity. A young preacher and leader would not make such sacrifices on a whim; the surrendering of his life was in exchange for the agape love he longed to see.

Dr. King never claimed to be a perfect, flawless man. Such an arrogant presumption would violate the humanity and brokenness of this influential leader. He recognized his frailties, but did not excuse himself from the hard work of perfecting our union. He was dedicated to the cause of Christ, leading him to unchartered waters and the “fierce urgency of now”. Dr. King demonstrated he would rather face death than live in the man-made world of apathy and despair.

THE TIME IS NOW

The excuses of delay and denial are no longer acceptable. We cannot delay in taking action steps to make a real difference in our communities and neighborhoods. We cannot deny the need to serve others who we know and see need our assistance. In the words of Dr. King: “This is no time for apathy or complacency. This is a time for vigorous and positive action.” Let this vigorous and positive action start in taking a small step to give what you can and when you can. It is my prayer and hope that the words of Dr. King go beyond a dream; it will become a reality for all of us to enjoy.