“A lie consists in speaking a falsehood with the intention of deceiving.” Augustine 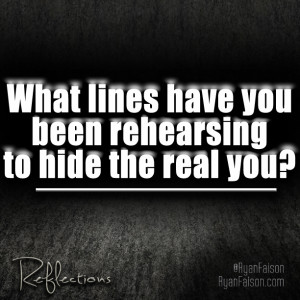 In my junior year of high school, I entered into the world of high school musical theatre. The headlining musical for the year was Sweet Charity and my debut role was the character Daddy Johann Sebastian Brubeck. This dark, mysterious and self-described oracular character demanded a performance equal to the captivating script.

Rehearsing lines with my fellow cast mates proved to be an experience I will never forget. I watched in awe how the character came to life in each scene through the music, dance and dialogue with flawless execution. It was quite fascinating how in the course of a play, you can become a whole new character and no one would know who you really are.

Once the play was over, I realized how easy it is to pretend you are someone else. Rehearse the lines, mimic the mannerisms, copy the tone and tenor of the voice and there you have it: a new character, a new identity. But, the new character is not the real you. The inner struggles are covered, the dark secrets remain hidden and the personality you want to show becomes visible upon demand.

We can say we are adapting or adjusting, but let’s be honest – we are lying! We are lying about who we are. We hide the best of ourselves to avoid risking showing the vulnerable sides of our being. As a result, very few if anyone knows who we are and quite often, that’s how we like it. Who really wants to see who we really are? I’ve got too much baggage and junk. What would be their reaction? Will they still love us?

The truth: When you deceive others, you deceive yourself and the unique purpose God created you for. The temptation to present a false self will only lead to moving further and further away from your identity. Rehearsing the lines of someone else’s script for your life requires you to play a fake character. Living out God’s plan for your life requires you to show real character.

Today, let’s make the choice to put the scripts away that put us in a box. This choice will take courage. It will take discipline. It will take sacrifice. But, the sacrifice is much greater than forfeiting your God-given identity – any day. Don’t surrender who you were created to be to become what you think others want you to be.

What lines have you been rehearsing to hide the real you? Whether intentionally or unintentionally, the deception can imprison you to be someone you are not. In this year, let’s collectively make the bold choice to be who we are without false pretenses. Let’s open ourselves up to learn, grow and mature. But, for the sake of yourself, those you love and the God who created you – don’t forfeit your identity.