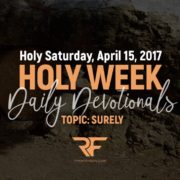 Lights vs. The Light

The Fighter Within: Interview with Onterio Green

"O Thou Who Camest From Above" (Powerful Lyrics)
5 replies