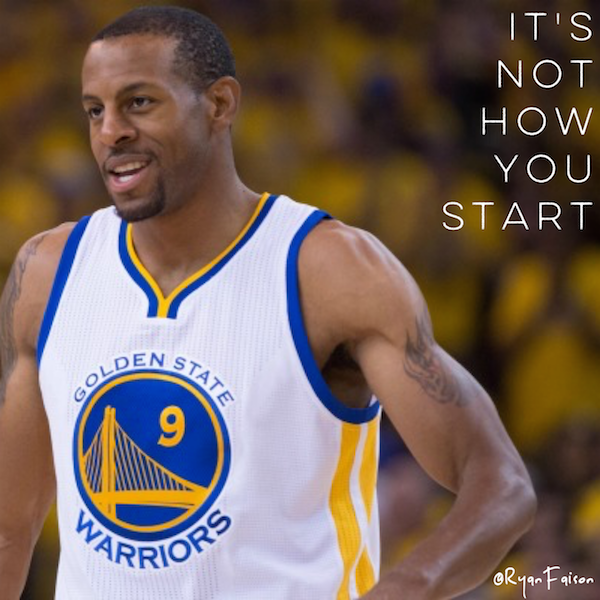 Despite not starting until Game 4 of the NBA Finals, Warriors guard Andre Iguodala was selected as the 2015 Finals MVP. – by Sean d’Oliveira | CBSSports.com

On Tuesday, June 17, 2015, the Golden State Warriors won their fourth NBA Championships in decades. With the current NBA MVP Stephen Curry on deck, along with a dynamic team effort, the Warriors demonstrated they were the best team on the floor and deserving of this championship.

After watching the celebration and award presentation, I was moved to see Warriors guard Andre Iguodala win the 2015 Finals MVP award. Andre did not start in a game this season until Game 4 of the NBA Finals. Take that in for a moment. He did not start until Game 4 and won the Finals MVP. His words of gratitude and thanking God had me thinking:

IT’S NOT HOW YOU START — BUT HOW YOU FINISH!

Right now, you may be sitting on the proverbial bench, awaiting for a chance to contribute and demonstrate your talents and skills for the cause. It’s tempting to give up, sulk in bouts of disappointments and relinquish the dream to be great. But, I want to encourage you to not give up! When opportunity knocks, you want to be ready and prepared! You never know how your contribution will make the world of a difference!

Congratulations to the 2015 NBA Champions — the Golden State Warriors! – RF

7 Replies to “It’s Not How You Start”